Stephanie Dolores Wesker is the first child of Albert Wesker and Eve Wesker. She was born in Wesker City in the year 2037 and is considered the princess of the city. She was known to be bullied by some really mean kids because of her being a princess, however by the age of 5, she showed them who was boss when she started mastering her powers. She soon after became the good friend of Julie Washington, another kid who was being bothered by the same bullies. Afterwards those same bullies became their friends and Stephanie became a very popular kid.

By the year 2059, Stephanie is a member of the New World Alliance and Division Delta Codenamed:Anti-Virus, however she is up against a new threat, the new Caesar-Virus has spreaded throughout the world by none other than it's creator, Patricia Caesar. Also by this time, Stephanie is 22 years old and has married Deacon Walsh, who changed his name to Wesker when he married Stephanie. During their honeymoon, before consummating their marriage, Stephanie injected him with Progenitor Virus A.

Because she possesses a new strain of the Progenitor Virus, Stephanie is capable to lift heavy objects over her head, however unlike her parents, she can lift slightly more than them. She is also somewhat faster when it comes to superhuman speed, as well as reflexes and agility. She also possesses a somewhat faster healing factor than her parents and even possesses stamina that can match anyone infected with G-Virus Alpha 1. She also possesses an immunity to disease and can even resist the T-Virus, as well as other artificial contagions.

Stephanie is known to have an enhanced intellect which gives her an advantage on the future battlefield and even against future outbreaks. Even as a 15 year old, Stephanie has the ability to pilot any aircraft, drive any car or truck and even boat there is. She also has an extensive knowledge on weaponry as well.

One of Stephanie's weaknesses is that she is vulnerable to any explosive or energy weapons, this will not kill her but enought to injure her either moderately or severely, depending on the weapon. Unlike her mother, Stephanie can walk in the daylight, however if she is exposed to night vision, she can go blind for an hour before ragaining her sight. 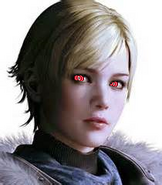 Stephanie at the age of 22
Add a photo to this gallery
Retrieved from "https://residentevilfanon.fandom.com/wiki/Stephanie_Wesker?oldid=32422"
Community content is available under CC-BY-SA unless otherwise noted.