Resident Evil: Hyper-Evolution takes a more realistic approach on weapons in terms of damage and how they function in real life when compared to other Resident Evil titles. Because of this, several "rules" to weapon stats are included in the game.

In general, the firepower of weapons attempt to reflect how much damage they would do in real life; perhaps the most obvious example is the automatics dealing far more damage than in other Resident Evil titles and magnums dealing far less. Furthermore, the rate of fire on nearly all weapons is dramatically increased, although firing most weapons at full speed very often causes accuracy to suffer due to recoil, while the reloading times are also increased (thus giving noticeably slower reloading speeds).

Many weapons will have a different capacity depending on when they are reloaded. These weapons will have one extra bullet if reloaded mid-magazine, but will not have that extra bullet if reloaded before being empty. This is because in many firearms, a shot is loaded into the chamber of the weapon right after the previous shot, unless there is no shot left to be loaded.

Many weapons also reload somewhat more slowly if reloaded after being empty, due to the weapon being needed to be cocked.

The reload times of both Shotguns vary depending on how many shots have been fired between reloads, as each shell or round needs to be loaded one at a time.

Many weapons possess some sort of speed penalty that will cause the player character to walk more slowly by a certain percentage. It should be noted that all handguns do not have speed penalties.

Penetration and levels of armorEdit

The amount of damage most weapons deal depend on a "Penetration" stat and the type of target. Enemies can either be Unarmored, Lightly Armored, or Heavily Armored. Many enemies can have different levels of armor on different parts of the body. For example, a Hunter's face, chest, biceps, and inner thighs are Unarmored, while the rest of its body is Lightly Armored.

The M92F is the starting weapon of Jane Bradstreet as well as Dom Lee, although only for the Chapter 1 in the case of the latter. It is more or less identical to the M92F featured in Resident Evil 5.

Dom's starting weapon in Chapter 2 is the P14-45, which he finds from a dead Iron Chariots guard. The P14-45 is able to use two types of ammunition – .45 Ammo and .45 Incendiary Ammo, the former of which is very common, and the latter of which is significantly rarer. When firing .45 Incendiary Ammo, the P14-45 deals twice the amount of its base damage (320) when used on any B.O.W. created through the Hyper-evolution virus, which consists of the majority of the enemies encountered; the P14-45 also possesses less recoil and a higher rate of fire when launching .45 Incendiary Ammo. Compared to the M92F, the P14-45 is more powerful but takes longer to reload and possesses more recoil and a slightly slower rate of fire.

The Hornets' Nest is exclusive to Dom in his Hell's Janitor costume in The Mercenaries minigame and does not appear in the story. It functions similarly to how the Matilda and the M93R does in RE4 and RE5 respectively, possessing a three-round burst function. Unlike the the aforementioned handguns, however, the Hornets' Nest can never fire in two-round bursts. Holding down the trigger button will cause Dom to quickly flip the pistol's selector switch, fire the three-round burst, and then quickly flip the switch back.

Besides damage output compared to the other handguns, another advantage of the three-round burst mode is that it stuns enemies almost to the extent shotguns do.

.45 Incendiary Ammo
Add a photo to this gallery

Unlike the shotguns of Resident Evil 5, the numbers shown for the shotguns of Resident Evil: Hyper-Evolution represent the total damage they do with all pellets combined. The pellets are also packed in substantially tighter patterns, making it much more easy to land all shots on a single target and thus, increasing the shotgun's effective range; conversely, at close range, hitting multiple targets with a single shotgun blast is borderline impossible.

The Shotgun is the first shotgun that appears in Resident Evil: Hyper-Evolution. Each time the trigger is pulled, the Shotgun fires 9 pellets. Although it seemingly possesses unimpressive damage output, the Shotgun stuns and knocks back most enemies.

10-Gauge Shells
Add a photo to this gallery

The G36 is one of the starting weapons of Jane Bradstreet in Chapter 1, and can later be found in Chapter 3-1. The G36 is a very effective weapon, possessing great firepower at a high rate of fire.

The MG 42 is among the most powerful weapons in the game, possessing immense firepower at a very high rate. The MG 42, however, is not without glaring drawbacks; it takes a very long time to reload, possesses immense recoil, and when wielded, substantially slows down the player character and prevents him/her from performing melee attacks. The MG 42 also bobs more than any other weapon when aimed with.

.223 Ammo
Add a photo to this gallery

Besides the Rocket Launcher, the Anti-Materiel Rifle, which is actually a suppressed PGM Hécate II, is otherwise the most powerful weapons in the game, but has the drawback of preventing post-shot Melee attacks. When striking an Unarmored or Lightly Armored target, the Anti-Materiel Rifle creates an outward cone of 200 damage up to a few meters behind the target.

The Semi-Auto Rifle, which is an AR-15 chambered in the .50 Beowulf cartridge, is the semi-automatic sniper rifle of RE:HE. While far weaker than the Anti-Materiel Rifle, the Semi-Auto Rifle possesses a much higher rate of fire and still allows the player character to perform melee attacks.

.50 Beowulf Ammo
Add a photo to this gallery

Compared to existing Resident Evil titles, the magnums of RE:HE are substantially weaker but possess much higher rates of fire, being only slightly slower than handguns.

The Magnum, which is actually a Grizzly Win Mag, is the only magnum to appear in the main story.

The Mateba is exclusive to Tony Wesker in the A Third Party minigame. The Mateba has very little recoil, akin to that of the weapons in the handgun category.

.357 Magnum Ammo
Add a photo to this gallery

Many of the grenades from existing Resident Evil titles make a return to REHE. Hand Grenades and Incendiary Grenades are noticeably more powerful than their previous counterparts. All grenades do not induce speed penalties.

The Flash Grenade functions almost identically to its counterparts in other Resident Evil titles. A single flash grenade deals 10 damage upon detonation, and stuns all forms of enemies, even bosses.

The Incendiary Grenade functions very similarly as it did in Resident Evil 4, 5, and 6. It instantly kills all Unarmored and Lightly Armored targets and therefore, in a way, the Incendiary Grenade can be considered a more powerful Hand Grenade with a noticeably smaller blast radius.

The Knife is used by Jane Bradstreet and Dom Lee (Chapter 1 only for Dom). All knives function identically, each dealing 50 damage per hit with a Penetration level of 2 and giving no speed penalty, but possess aesthetic differences. 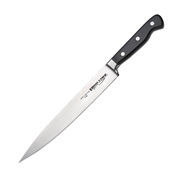 Dom's knife
Add a photo to this gallery

The Speargun is available in Chapter 6-3. The Speargun is most notably the only weapon, besides the knife, that can be used underwater, and is therefore, one of the most effective weapons to fight the Lyngbakr with.

In Chapter 5-2, shortly before the fight against the mutated Charles Burr, Dom and Jane find a pair of Flamethrowers. The Flamethrower is a unique weapon that, like Incendiary Grenades, can ignite enemies and continue to damage them for a few more seconds even after the trigger is released. At maximum efficiency and including the damage caused by these “after-burns,” the Flamethrower deals damage at a rate of 2200 damage per second to Unarmored and Lightly Armored targets and 1100 damage per second to Heavily Armored targets. The Flamethrower induces a -10% speed penalty.

The Rocket Launcher is obtainable in Chapter 5-3, shortly before the fight against Surtr. As with most Resident Evil titles, the Rocket Launcher is the most powerful weapon in the game and can take out groups of enemies. Although multiple rockets can be picked up in Resident Evil: Hyper-Evolution, rockets are very rare and should only be used against Surtr and/or other powerful enemies.

The Compound Bow is exclusive to Tony Wesker in the Mercenaries minigame and the A Third Party minigame. The Compound Bow uses two types of ammunition – Aluminum Arrows and Explosive Arrows – the latter of which deals 10 or 60 damage on impact (depending on the target), and then detonates for 16,000 damage. In A Third Party minigame, Tony starts with five explosive arrows and cannot pick up any more.

Retrieved from "https://residentevilfanon.fandom.com/wiki/Resident_Evil:_Hyper-Evolution/Weapons?oldid=50723"
Community content is available under CC-BY-SA unless otherwise noted.