Leon S. Kennedy is a former police officer of the late Raccoon City, agent for D.S.O and is a current member of Division Delta Codenamed:Anti-Virus. His wife is Claire Redfield, the younger sister of B.S.A.A.'s Chris Redfield. He is also known for his knowledge in taking out Zombies such as the incident in Harvardville where he led 3 troop team consisting of himself and two other memers of the Special Response Team. He was also involved in the incident within the Eastern Slav Republic, but was captured and thought to be a terrorist by many of the people there. By the year 2037, Leon and Claire were thawed out of cryogenic stasis and were given assignments by Michael Franklin Miller.

Leon is an incredible marksman, capable of making head shots from over fifty yards and rarely missing his intended target as well as showing a proficiency with fully automatic weapons. During his mission to the Eastern Slav Republic, Leon carried a customized AKMSU, with which he fought Lickers and Tyrants. Leon is capable of making efficient use of "heavy" weapons, having used rocket launchers in fights against larger creatures on multiple occasions as well as being able to effectively operate the main cannon turret on a small tank. Leon is also remarkably skilled in knife combat, having a preference for them in close-quarters as he claims they "work better" advice he passed on to Ada. He has advanced in aptitude with knives to the point of using them expertly in an ambidextrous capacity, even being able to switch hands in the midst of combat. In addition to his mastery of weapons, Leon is an accomplished unarmed combatant. While in Lanshiang, Leon was able to match Chris Redfield in hand-to-hand combat evenly until they both drew their weapons on each other simultaneously. In terms of physical fitness, Leon is in peak physical condition. He is very acrobatic with incredible reflexes, being able to perform various flips and evasive maneuvers to avoid lasers, enemy attacks, debris, and other obstacles. In addition, he seems to be able recover from injuries incredibly quickly and seems to be extremely resilient. Leon is also somewhat of a skilled pilot.

Whenever he is not on duty, Leon likes to spend time with his wife and does so on many occassions. He is also big on going to either gun ranges or training in the Holorooms with either his wife or by himself. He also enjoys playing poker on either a Friday or Saturday Night and plays with either his friends or family.

Leon & Claire on their wedding day 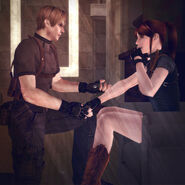 "Claire Redfield, will you marry me?"

Leon in the Eastern Slav Republic, holding his customized AKMSU
Add a photo to this gallery
Retrieved from "https://residentevilfanon.fandom.com/wiki/Leon_S._Kennedy_(Alternate_Timeline)?oldid=53688"
Community content is available under CC-BY-SA unless otherwise noted.