"Ever since the dark times, I've never stopped running away from monsters. I guess it was just meant to be."
―Dom

Dominic "Dom" Lee, formerly Dominic Wesker, is a Special Operations Agent of the Bioterrorism Security Assessment Alliance's North American branch. Dom Lee is the originator of the Hyper-evolution virus, which has been sought out by various bioterrorists, most notably, the Steel Chariots.

Born in 1986, Dom was among the last of the children to be conscripted into an attempt at reviving Project W. Oswell E. Spencer assigned Craig Silverman to supervise Eric Lee and Charles Burr's observations of Dom after the child was injected with the prototype virus along with other experimental viruses. Like most of the Wesker children before him, Dom's body responded negatively to the virus. However, instead of outright dying, he fell into comatose. With Spencer's consent, Silverman marked Dom for termination, and granted Lee the responsibility to dispose of the child. Feeling guilty, Lee was incredibly hesitant, and delayed this order for days. During this time, he discovered a new virus that was produced inside Dom's body. After conducting a few tests on a microscopic level, he found out that the virus exchanges genetic material with other viruses, keeping many enhancing traits while eliminating many degrading ones; nevertheless, what this virus would keep or eliminate remained unpredictable. Due to its properties, Lee named the virus, the Hyper-evolution virus (HEV), and then decided to adopt Dom and fake the child's elimination. Unfortunately, Lee was only able to stay with his wife and newly-adopted son for several months before he sent his family to live in St. Aaulsberg to prevent them from being targeted by the Umbrella Corporation.

"Holy fuck, I am not going in there."
―Dom to Maurice Johnson, contemplating as to whether or not to enter a pitch-black hallway

Dom grew up under the care of his mother, who became a police officer of the St. Aaulsberg Police Department. In the year 2002, when Dom, his friend Maurice Johnson, and Maurice’s younger sister Felicia visited the hospital to see the mother of the latter two, a t-Virus outbreak erupted in the city. Maurice’s mother succumbed to infection, forcing him to kill his own mother. Among the very few survivors within the hospital, Dom and Maurice, accompanied by Felicia, fought their way out of the hospital, having managed to acquire a Ruger Blackhawk and a Triple Shot, respectively.

Upon reaching the first floor of the hospital, Dom initially intended to remain in order to wait for his mother to arrive. However, Maurice believed it to be better to leave the hospital and eventually convinced Dom to do so. Once they finished planning their escape route, Dom and Maurice left the hospital. As they traveled through the city's remains, Dom, Maurice, and Felicia, by chance, met up with Tammy and the small number of survivors she had gathered. The group gradually made their way out of St. Aaulsberg, but throughout the escape, survivors fell to various enemies, including zombies, B.O.W.s, and insane/immoral humans. The last to fall were Maurice and Tammy, the former of whom was stabbed in the back by Doll-Face, and the latter of whom was bitten upon helping Felicia out of the debris she was trapped under. While Tammy stayed behind, Dom, Felicia, and Aiden O'Shaunghnessey, the only survivors of the group, left St. Aaulsberg behind.

Following his escape of St. Aaulsberg, Dom moved in with his paternal aunt, Lee Kueiying in the urban township of Tungmen, Taiwan.

Three years after the destruction of St. Aaulsberg, a large number of hunters were released into Tungmen. One of the hunters burst into Kueiying's apartment and killed her while Dom managed to escape. In response, the BSAA sent a Special Operations Unit to quell the bioterror attack. Unfortunately, the hunters killed all but one member of the BSAA team, Jane Bradstreet, whom met up with Dom. Jane attempted to escort Dom to the extraction point of an incoming BSAA chopper, but both were incapacitated by a stun grenade thrown by an Iron Chariot operative. During this moment, the team of operatives captured and brought Dom to the Jötunheim research facility, located on a remote island in the Pacific Ocean.

At the Iron Chariots’ research facility, Dom met Charles Burr, who was the lead researcher on the island. Burr explained to Dom that the latter was a subject for an attempt at reviving Project W, and that Dom’s body produced a new and unique virus. Having successfully dug out his former partner's notes, Burr began running experiments using the HEV drawn from Dom's blood. While Dom remained as the Iron Chariots' prisoner, the Iron Chariots manufactured many bioweapons using the virus produced from Dom's body.

Three months since Dom's capture, Jane Bradstreet, now a BSAA Special Operations Agent, arrived at the island to investigate bioterrorist activity, and found Dom by chance. Jane immediately freed Dom and began to escort him off the island. Burr, however, locked down all doors of the building and released his bioweapons after Dom and Jane. When a handful of lesser bioweapons proved to be unsuccessful, Burr started to unleash his more powerful creatures, ignoring the fact that doing so was overkill for a mere pair of humans. Regardless, Dom and Jane were able to find weapons strong enough to eliminate these monstrosities, narrowly surviving each encounter. Having no way of leaving the facility, due to the building's doors being locked down, Jane and Dom decided to confront Burr directly. During this time, they also briefly caught glimpses of Tony Wesker, who was also on his way to Burr.

Dom and Jane entered the control room, only to find that Burr had mutated into a centaur-like creature. Not as powerful as his better creations, Burr was inevitably defeated in his struggle to finish off Jane and Dom. Out of vengeance, Dom finished the incapacitated but conscious Burr with a flamethrower. Jane then ran to the controls of the building, only to find out that the doors had already been opened. On their way out, Dom and Jane faced Burr's ultimate bioweapon – Surtr. Throwing everything they have at the massive creature, Dom and Jane eventually brought it down. Jane told Dom to follow her to the island's port, hoping that there would be ships remaining. Even outdoors, bioweapons continued to chase after Jane and Dom, but the two successfully made it to their destination vessel.

On their way off the island, the Lyngbakr attacked the ship, causing it to begin sinking. Jane and Dom boarded a lifeboat, and with their weapons acquired from the island, put down the creature for good. BSAA helicopters arrived a few hours later to extract Jane and Dom, and the latter was then taken into BSAA custody.

Dom asked to join the BSAA, no longer having anywhere to go. The BSAA agreed to Dom's request, and he eventually proved to be very capable, becoming a Special Operations Agent after four years of training.

"Dodge this."
―Dom to Yanus Prokopenko

With the Hyper-evolution virus activated by the t-virus in his body, Dom has always possessed high natural physical strength and speed. As a civilian, Dom practiced wushu and frequently attended shooting ranges, allowing him to competently hold his own in dangerous situations, although his lack of practical experience prior to joining the BSAA still put him below seasoned soldiers and agents such as Jane Bradstreet in terms of overall combat prowess. After receiving his training under the BSAA, Dom became one of its most skilled members of the BSAA, possessing highly-proficient marksmanship and physical abilities that rival those of Olympic athletes.

As a BSAA Special Operations Agent, Dom's "signature weapon" is the Hornet's Nest, which is a compact 9mm pistol with a selector switch that can allow it to fire in 3-round bursts. The Hornet's Nest is also fitted with a red dot site, a tactical light, and a suppressor. For his combat knife, Dom unconventionally uses a balisong, which he occasionally performs one-handed tricks with when idle.

Dom is a young man of East-Asian descent with short hair and a clean-shaven face (with the exception of his appearance in the majority of Resident Evil: Hyper-Evolution, in which he was a prisoner). As a character in multiple games, Dom has been shown with multiple different outfits, all of which exhibit green in some shape or form.

In Resident Evil: Gambit, Dom wears a green t-shirt, a pair of jeans, and white sneakers.

Early in Resident Evil: Hyper-Evolution, Dom starts with an olive-green t-shirt along with a pair of jeans and black sneakers. Since becoming the Iron Chariots' prisoner, his t-shirt was replaced with white tank-top and green pants. Dom also has a bonus costume, which is based off his original concept, where he wears a white motorcycle helmet, an olive drab hoodie with a black bulletproof vest over it, and the same pair of jeans and sneakers he wears for his first costume.

In Resident Evil: Hyper-Evolution 2, as a BSAA Special Operations Agent, Dom wears a formfitting Kevlar suit that covers him neck-to-ankle with dark-green tiger stripe camouflage patterns. Additionally, Dom also wears a pair of gloves and boots as well as armor over his body, his forearms, and his shins, all of which are colored black. 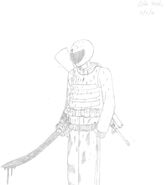 Very early concept of Dom in RE:HE
Add a photo to this gallery
Retrieved from "https://residentevilfanon.fandom.com/wiki/Dom_Lee?oldid=50624"
Community content is available under CC-BY-SA unless otherwise noted.