An elite fighting unit, DarkRain are the remnants of U.B.C.S. and U.S.S. units that were loyal to Umbrella Corporation scientist Roderick Lazarus. After the dissolution of Umbrella, those who avoided prosecution or capture joined up with Lazarus, offering them a place where their previous skills would be useful, whilst avoiding the angry arm of the government, or worse, the anti-Umbrella activists like the B.C.K. or even vengeful splinter groups of the B.S.A.A.

The first recorded use of the name DarkRain was when Lazarus ordered U.B.C.S. soldiers under his command to clean up and remove any important infomation still inside his factory facility. The unit was brought to the facility by helicopter. When the unit went into the facility, they picked the facility mostly clean, apart from one computer terminal that had been left on accidentaly. When the unit had finished their mission, they found their helicopter missing, its place taken by a man, Gareth Knight. In ordere to claw some dignity out of the failure, before the next helicopter arrived, Jacob Sans, commander of the unit, decided to experiment on Knight. It was this act that bought him to the attention of Lazarus, as whilst conducting research on Knight, it was discovered that Knight had an immunity to the T-Virus. Sans took samples of Knight's blood and left him to die when the extraction helicopter arrived to pick the unit up.

A basic DarkRain unit is compromised of a multitude of Basic Infantry, including at least one Sergeant and Captain. There can also be a few Specialists intermingled with Basic Infantry. There is a possibility that at least one Spec-Ops soldier may be included into one of these units, unknown to any other sqaudmates, including Captains.

Under the command of Roderick Lazarus, the DarkRain force has strict firearms guidlines, with basic weaponry going out to ordinary soldiers, and more effective ordanance going out to higher ranked soldiers. DarkRain specialists also have specific weapons. The only exemptions from these guidelines are commanders, who may use whatever weapons they wish. 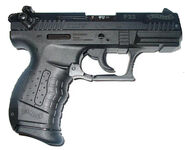 Walther P22, Standard sidearm for DarkRain Scientists
Add a photo to this gallery

DarkRain Agents enhanced by the T-Synth virus appear as common enemies in Resident Evil: Fall of Lazarus. There are different classes of DarkRain Agents, some of which are more common, and some of which are more durable and dangerous. All DarkRain Agents have the ability to fire their equipped weapon and melee the player character with a left-handed spike-like appendage that comes out of the forearm. The limbs and necks of all DarkRain Agents are Fleshy (Thin); the eyes of helmetless enemies are Fleshy (Thin), while the eyes of helmeted enemies are Fleshy (Thick). The non-head weakspots of DarkRain Agents are their necks and chest-area, which receive four times the normal damage when shot from any direction; a shot to the back at chest-level will indeed grant the vital bonus if the weapon allows. It should be noted that each of the higher-ranking DarkRain Agents possesses a Rifleproof layer at the front, back, and sides of his torso, each of which possess 170 HP and do not count towards the enemy's own HP. When each layer is shot off, the damage left by the previous shot will carry over into the exposed torso underneath, which is Pistolproof.

Retrieved from "https://residentevilfanon.fandom.com/wiki/DarkRain?oldid=55990"
Community content is available under CC-BY-SA unless otherwise noted.