Chris Redfield was a member of the United States Air Force at 17 years old and was the former Point Man of the S.T.A.R.S Alpha Group. He is currently working as an operative for the B.S.A.A. along with his partner/Wife Jill Valentine and his friend Sheva Alomar. By the year 2037, Redfield went into working as a drill sargeant for Division Delta Codenamed:Anti-Virus.

Being a member of an Anti-Bioterroism Unit, Chris has met and befriended Michael Franklin Miller, Jane Valentine, Sam Redfield, Claire Rain and other members of Division Delta. In the year 2014, Chris proposed to his partner Jill Valentine while on a mission in Germany, she accepted and they married by that year. They went on their honeymoon in the Caribbean.

Chris is excellent in the use of both long ranged and melee weapons as well as hand to hand combat. He is also highly accurate with a sniper rifle and has proven this on several occassions, as well as being a naturally tough combatant. Redfield's endurance and stamina also prove useful against attacks performed by people such as Albert Wesker and not get unsconcious. Considering his size, Chris is also very fast and is capable of dodging enemy attacks, as well as rip apart and impale enemies with his natural strength. He is also known to be very agile as well, also he is very well trained in knife techniques and other forms of combat. Since he was in the Air Force, Redfield is a highly skilled pilot. 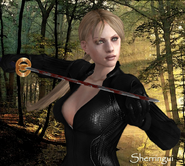 Jill Valentine (Chris's Wife)
Add a photo to this gallery
Retrieved from "https://residentevilfanon.fandom.com/wiki/Chris_Redfield_(Alternate_Timeline)?oldid=57932"
Community content is available under CC-BY-SA unless otherwise noted.