"You just don't understand do you Miller, I am a god and even you will bow before me"-Wesker to Miller

"A god, ha, if theres anyone who should be a god here, it's me, but I don't believe in being a god"-Miller responding to Wesker

Albert Wesker was known as the former CEO and head of the Umbrella Corporation, which he used in his quest for world domination so he could try and rule over everything as a god. He was killed in 2009, however was bought back by Oswell E. Spencer in 2037.

By 2009, Michael Franklin Miller became a member of Division Delta Codenamed:Anti-Virus and they were intending on attacking the Umbrella captured White House in Washington D.C where Wesker was waiting for Alice, however he was suprised to find out that she wasn't alone when Miller and her busted through into the Oval Office. Alice and Miller confronted Wesker in a straight up fight which Wesker escaped from, having exhausted all but one of his options and that was to self-destruct a base underneath the White House. Miller and Alice managed to escape, however Division Delta's leader Sargeant Raincoat deserted them and rejoined with Umbrella's strikeforce and explained that Miller was enhanced with his superhuman abilities. Wesker was intrigued by this and waited for Miller to find him.

Wesker was still waiting for Miller to strike and when he gained intel that Wesker was within the Caribbean, Miller and the rest of Division Delta's land forces chartered several obsolete naval vessels and headed for the Caribbean. When they arrived in the Caribbean, Miller and his fleet confronted and engaged Umbrella's main naval forces. Wesker watched this fight from the underwater base known as "The Heart", Miller and Alice on the other hand piloted an F/A-18 Hornet into a large dogfight and was shot down, which made it easier for them to infiltrate the base and get to Wesker. Once inside Wesker was found within a large throne room where he and 2 clones of Alice (Who were endowed with her powers) were ready for combat. Alice decided to take on the clone versions of herself while Miller took on Wesker. Miller outmatched Wesker, despite Wesker's strength and abilities, Miller killed him with a fist through the chest, his heart and then back, while whispering in his ear "Your reign of terror ends here motherfucker" and then he ripped his heart out.

By the year 2037, Wesker is aleady dead and Miller is the leader of the world's security, however a new threat is at large, a younger clone of Oswell E. Spencer has been made, who also, after his resurrection created a clone of Albert Wesker and so Spencer erased his memory and stole a sample of his DNA from him, which contained the Progenitor Virus. The clone turned on him and escaped, deciding to team up with Division Delta.

Before injecting himself with the Progenitor Virus that Birkin gave him, Wesker was a master at martial arts, and with his cold- blooded attitude Wesker showed no sign of fear and was able to defend himself against a horde of monstrous creatures (the Ivans; Proto-Tyrant; Lisa Trevor, and the mutated-Sergei Vladimir). In addition, he possessed a special blood type, which largely acted as the reason why he was able to not only survive being injected with foreign substances such as the Prototype virus and later Uroboros, but also reap in all the benefits of the virus and none of the drawbacks. Wesker injected himself with the virus and let himself get killed by the T-002. As a result of his viral injection, Wesker was granted a number of superhuman physical abilities. Wesker demonstrated hyper-accelerated speed and reflexes, enhanced agility, intensified endurance, increased strength, limited healing factor, and he often took great pleasure in showing off his power to intimidate his foes. These attributes gave him a number of advanced combat capabilities. The virus he injected also had the added ability of superhuman endurance and near-invulnerability; hardening his skeleton, internal organs, tissue, and skin, to the point that attempting to punch him or engage in hand-to hand combat would most likely result in fractured limbs on the part of the attacker.

Notable achievements of his superhuman speed, accelerated vision, and agility included being capable of dodging bullets at practically point blank range with nearly no effort (including rapidfire, multiple shot weapons, grenades, and Rocket Launchers), being able to cover great distances in short time (relatively equal to the time it would take using a fast vehicle), adhering to walls and ceilings like a spider and performing short dashes of speed faster than the normal Human brain could process (causing him to appear to be teleporting). Some say that due to the virus he did not change in appearance (still youthful) although he is aging (48), and made him smarter. The virus, however, was also unstable, which also led him to utilize a specialized serum to keep the virus at bay at specific intervals. Ironically, his own serum was also his greatest weakness, overdoses of the serum would cause him to be poisoned (although he didn't live long enough to know if he can heal from it). The overdose of serum caused his vision to deteriorate and blur, his agility seemed to be slowed slightly (though he still remained lethal and could dodge some attacks) and blood veins to pop out on his head, which also caused him to experience debilitating headaches. His recovering ability, however, remained intact, as demonstrated by his recovering from both being shot and falling a great distance despite being poisoned by his own serum. His aim, while using his weapon, is also quite inhuman.

Notable achievements of his increased strength included being able to lift large missiles with one hand and throwing them, lifting large steel girders off his body, lifting an adult human off the ground with one hand effortlessly, thrusting straight through the chest of a person with his fingertips, killing a chimera B.O.W. with just one kick, sending someone flying with a single backhand swipe, and punching through a solid sheet steel missile.

The injection also gave Wesker a low-level rapid healing factor which, coupled with his incredible endurance, rendered him nearly invincible to conventional damage. A rocket exploding right in his hands was only sufficient to weaken him for a moment, and thousands of pounds of steel falling a few stories on top of him failed to even incapacitate him, merely dazing him for a few brief seconds, and despite having his face hideously burned, he quickly healed up. He also healed quickly after getting shot in the head and falling a great distance out of a jet, and despite being overdosed by his serum. Uroboros is known to increase all of his powers and abilities as well.With these powers, Wesker mainly did not require weaponry other than his brute strength during combat, combined with a sufficient strategy and some meticulous observation. However, he did keep his Beretta 92F Custom 'Samurai Edge' and a Desert Eagle holstered at all times, and was known to never let his guard down, even outside the battlefield. The only ones who Wesker is incapable of beating is Michael Franklin Miller, Jane Valentine and even Dean Miller, as well as every other person enhanced by T-Virus Alpha. 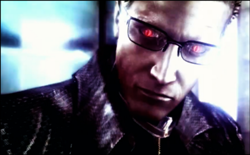 Wesker's glowing red eyes (As a result of the Progenitor Virus) 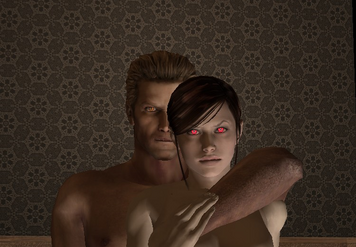 Albert with his wife Eve Wesker on their honeymoon 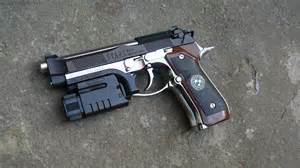 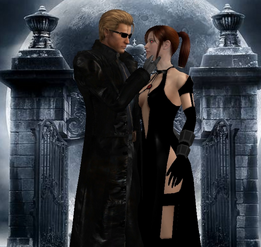 Wesker and Eve about to kiss 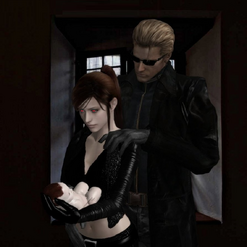 Wesker with Eve and their first child Stephanie Wesker 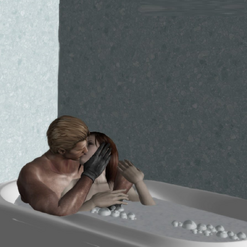 Albert & Eve kiss while in the bathtub
Add a photo to this gallery
Retrieved from "https://residentevilfanon.fandom.com/wiki/Albert_Wesker_(Alternate_Timeline)?oldid=47141"
Community content is available under CC-BY-SA unless otherwise noted.